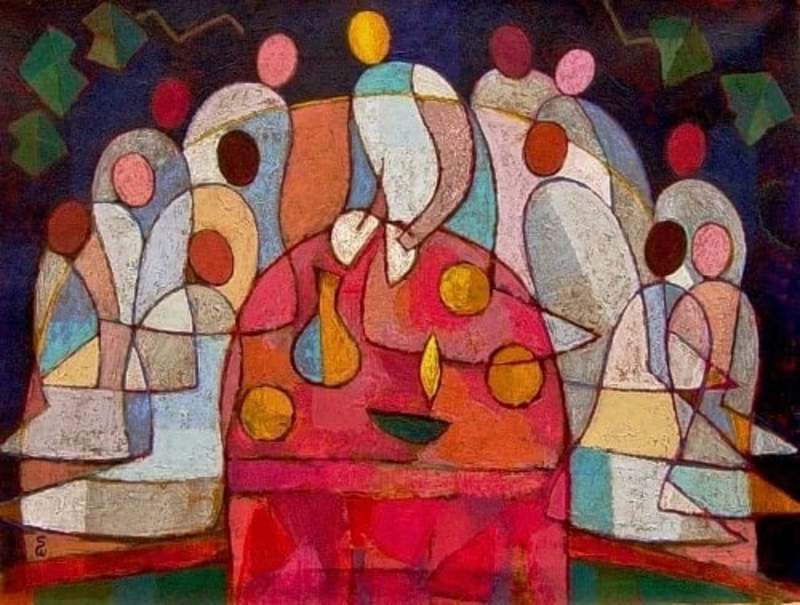 I was reminded of the book and movie series, “The Hunger Games,” this week as I pondered Jesus’ last supper. Particularly in the context of our Gratitude study these past Sunday evenings. In The Hunger Games, the empire is portrayed by the nation’s capital. The people there have all they want, and they are frivolous with all of it. They eat too much, drink too much, enjoy far more than their share of the resources. In contrast, most of the districts within the nation provide the resource they are particularly gifted with and get very little in return.

In order to keep this system in place, the powers in charge establish an annual slaughter of innocents in which each district sends two children to fight against each other to the death. Whichever child wins, their district gets additional resources for the year, and the youth’s family gets to live in the Victor’s Village in their district.

Of course, this works exceptionally well at keeping the districts under the capital’s thumb. And the ring leader of this circus is the corrupt and evil President Snow. Near the end of the story—and I apologize if this spoils things if you haven’t read or watched it—near the end the capital is overtaken and Snow is arrested. However, as our heroine overhears conversations among the new leaders from the districts, she is faced with the fact that evil will just be replaced with more evil. The person being placed in the position of president has decided it’s only fair that now the capital’s privileged children should be placed in the arena, forced to kill each other while the districts watch on.

And this is the challenge of our world. From long before Caesar and the Roman Empire and long after, as well, even the best-intentioned systems only replace a corrupt pyramid with another pyramid. No matter how hard we try, we can’t conceive a world in which we don’t operate with a leader on top, privileged people within direct access, and the lowly and oppressed and excluded at the bottom. Even the Church is built like this. Our nation, though our best selves try to address the issues it causes, is built in a pyramid. And we can’t seem to change it.

We may elect new leaders, but we just put the new ones at the top and perhaps shuffle those underneath them a bit. But we still have a pyramid.   But then we get this moment—in our lives and in Scripture—where Jesus turns the world upside down and begins to chip away at the pyramid. He starts by washing the disciples’ feet. It’s a servant’s job. If anything, the disciples should have been lining up to wash their teacher’s feet. But this isn’t how God works.

Of course, this throws Peter off a bit. “No, Jesus. This isn’t right. This isn’t how the world works.” But Jesus looks at him. “You’re right, Peter. But I’m not of this world. It’s time to change things.” And, God bless him, Peter’s pendulum swings to the other extreme. “Okay! Then wash my whole body!” I wonder if he thought that if his whole body was washed by Jesus, he would be just a little closer than everyone else. Privilege and pyramids, once again.

And that’s exactly what Jesus does. He doesn’t replace the pyramid and just put God on top. He doesn’t turn it upside down. He turns the whole world on its side and breaks apart the systems we continue to hold onto.   You see, at this meal—this Passover meal—the Jews always look back on God’s deliverance from Egypt. They remember Pharaoh—the guy on top, the one who forced God’s people into a life of scarcity. He controlled the food, the resources, the work, and even who lived and died. When he thought the bottom of the pyramid was getting a little too large—that many people could create problems if they organized—he decreed that all of the male children should be killed. He was the arbiter of death; the proclaimer of never enough.

And then God steped in, bringing God’s people out of Egypt. Through the desert, the people complained and refused to trust God’s provision. They complained that it was better in Egypt. It was better with Pharaoh. They don’t trust God’s free gift because our narrative has always been that you can’t get something for nothing.

But God brings them to a land ‘filled with milk and honey’—a land where they will know abundance instead of scarcity. And yet, time after time, they refuse to trust this. They let empire thinking take over. They prefer to live at the bottom of a pyramid than to live without the pyramid altogether. Maybe because they keep hoping that someday they will replace the guy at the top. And THEN there will be justice.

Isn’t that what the people expect the Messiah to do? Conquer Rome so that God’s Chosen can be in charge of the resources. It’s what James and John anticipate when they ask Jesus if they can sit on his right and left in his glory. It’s what the disciples are concerned about when they discover someone else doing miracles in his name. It’s what Peter hopes for when he asks to be washed more completely. It’s perhaps what Judas fears may NOT happen when he betrays this messianic imposter who isn’t taking the battle seriously.

Consider this for a moment. Debt and duty are part of the pyramid system. If someone gives you something, it’s never free. There’s the expectation that you will do the same in turn. Someone gives you a Christmas card? You may feel obligated to send one to them. Or, if someone doesn’t send you one, you aren’t going to bother, either.

But if God is undoing the pyramid system, what does that mean for us in terms of debt and duty? If all of life is free gift given to us by God, why do we always fall back on the idea that we owe God? That we have a debt to God that we can’t repay? God doesn’t tally debt because abundant life is given freely—without strings attached. So, what happens on the cross isn’t a payment of our debt. In fact, when it comes to gratitude and this pyramid approach, the big day isn’t tomorrow but today.

Today—and every time we celebrate communion—we are brought into God’s new way of abundant life. When the table is set, the pyramid begins to crumble. Because at the Lord’s Table, all are one. We are brought together into God’s great and ever-growing circle of life. No longer is there someone on top, calling the shots, demanding repayment, and passing down decrees, whether generous or hurtful. Instead, God draws us into a vast, circular table, always setting new places and bringing in more chairs. And God, at the center, is more like gravity, pulling us into God’s heart. Bringing us close. Drawing us together into a holy communion.

Diana Butler Bass says, “That Thursday night is the last supper of a world of oppression, violence, and control… But, it’s also the first feast. It’s the first feast of the world that God has always dreamed of.” And she looks ahead to the crucifixion as Rome’s attempt to destroy the table by destroying Jesus’ body. Rome doesn’t want to lose their pyramid system—and most days, neither do we. But God has a much better system in mind for us—a way of being that offers a table where EVERYONE is fed, where EVERYONE has enough, and where NO ONE is on top, ahead, or privileged.

Can we imagine such a world? I hope so, because it’s the world we enter every time we approach the Lord’s Table, filled with the gifts of God for the people of God.

"The Last Supper; The First Feast"

"Even the Stones Will Cry Out"

"Death is a Sensory Experience"